Referring to the budding leaves on the trees, of course.  Spring has come early this year.  It had already hit 80 on a few days in late February, and bulbs everywhere had started blooming.  Short sleeves... in February!  That may be normal for some people, but it's pretty uncommon for here.  Although it is the South and you'd expect it to be warm, the lowest point of the jet stream comes right over top of us in the winter.  We may not get blizzards or anything, but we get plenty of that arctic wind blowing through for a few months.  But not this year.  There was no snow to speak of this winter, alas.  It barely got below freezing.  A few months ago I bought a bird bath heater so the little birdies would have fresh water when everything was frozen... I've only turned it on like three times.  I don't know if it's indicative of anything, but last summer was super hot, as well.  Record breaking highs.  It's just weird.  I do hope this extremely short and mild winter doesn't make the bugs go crazy this year.  We kinda rely on some hard freezes to kill some of them off.  But there's already mosquitos out there!

Evil Dolly's Movie Recommendation of the Day:  The Skin I Live In.  Foreign, subtitled, it starts out with Antonio Banderas, an obsessed plastic surgeon, running some sort of long term skin-grafting experiment on a woman he has imprisoned in his mansion.  It's slow-paced, somber, and mainly psychological, and I thought it was quite good.  In fact, it's very similar to something I'd write.  It's always a rare delight to see a movie or read a book that goes to the places my own mind would go.  If you give it a watch, try and guess the one line reveal that made me laugh out loud and slap my thighs. 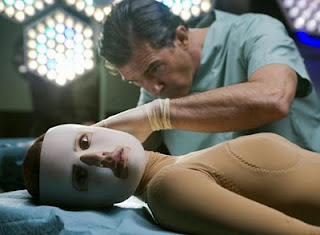 Posted by EvilDolly at 5:22 PM

I may have to track this movie down.

Incidentally, I dropped by to see if you had updated, and saw that you are now blogging. So I get to the first, apparently to post a comment. Yay me!