This summary is not available. Please click here to view the post.
Posted by EvilDolly at 11:30 AM No comments:

The world is soft and strange outside.  It's the pollen, you see.  Everything's been coated with a thick layer of yellow-green pollen.  It lends an eerie aspect to everything, especially in the evening.  It will soon all be washed away in the rain.  I'm glad I don't have allergies.

The other day I saw more caterpillars than I've ever seen in my life.  It was a caterpillar parade!  Thousands of them, all marching along the edge of a long, stone wall in twos and threes...  a virtual river of undulating fur.  I wish I'd had my camera with me.

I watched Edward Scissorhands last night.  I must have been about 15 when I first saw it, and I connected with it even then.  I've seen it many times since, and it never fails to bring tears to my eyes.  In particular, it's the scene near the end where the girl tells him "Hold me."  He wants to more than anything, but fearing he'll hurt her, replies "I can't" and walks away.  Then she makes him hold her, anyway.  I sometimes feel very much like that.  Being the monster that I am, I'm sometimes afraid of holding the girl, knowing that I'll hurt her.  And, I suppose, I want the girl to make me hold her, anyway.
Posted by EvilDolly at 7:30 AM No comments:

Certainly feels springish out there, anyway.  Various trees are flowering, bulbs are bulbing, and the redbuds are going all purply.  Even the trees are growing new baby leaves.  And I got bit by a mosquito yesterday.  I'd say it's certainly springy.  Went on a walk this evening and stopped to help a slug cross the road.. cause even slugs need a hand, sometimes.

A sub friend read my latest story (Eudeamon) and liked it so much that she made a figurine of one of the characters.  I was rendered speechless, but was very touched.  Here it is... it's cute! 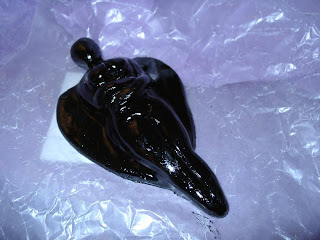 No one's ever made me a story-related gift before.
Posted by EvilDolly at 9:30 PM No comments:

What a miserable day.  A couple hours after I woke up I realized I was going blind... the sure signs of a migraine coming on.  I used to get them in high school, less frequently in college, and none at all in the past few years.  Once one's on its way, there's nothing you can do but cancel your appointments and slink into bed.  Ugh.  At least the worst seems to have passed now and I can see again.  Now I've got a lingering, throbbing headache, but at least I'm not nausious anymore.  And they still don't have a cure for these things.

On the up side this week, the new roof looks splendid.  Seems to have gotten put on without a hitch.  It has a lot more texture to it than the old, light gray shingles that have been up there since before I was born.  Next on the outdoor list is getting new siding or at least new paint.  If I had all my druthers in a row, I wish I could have natural stone siding.. always loved that look.. but that's just way too much money to spend on such a thing.  As for paint, I'd really like something in the mauve-ish area, but a little more subtle.  Or maybe a blue-ish or gray-ish lavender is the way to go.  Then again, I wouldn't want a color that'd lower property values of the whole block.  That's no way to win friends and influence people.
Posted by EvilDolly at 8:00 PM No comments:

There's guys up on the roof.

You see, I've got a bad case of the squirrels.  For a while now, unbeknownst to me, they've been pulling up the old, brittle shingles and chewing their way into my attic.  What could they want in my attic?  It's slightly warmer in there, yeah, but surely it's not as cozy as a pile of squirrel bodies in a little squirrel nest somewhere.  I didn't even know they were up there until I heard them running around overhead.  So now I gotta get things fixed.

The price I was quoted for a whole new roof seemed reasonable (actually about what I was expecting to pay for a patch job), so I'm going ahead and getting a whole fresh roof put on.  At the moment, there's shingles flying off the roof every which-a-way.  Hope it all works out well.  And hopefully, I probably won't have to do this again in my lifetime.  I wasn't expecting the workers to show up today, though.  I woke up from a sound sleep and a spooky yet amusing dream about a ghost into asphyxia play in some haunted hotel to the sound of thumpings and bangings.  I honestly thought there were fireworks going off somewhere nearby and went to my window... oooh, it's coming from the roof!

Okay, they're directly above my head now.  I better move in case someone falls through.
Posted by EvilDolly at 11:30 AM No comments: