Happy Holidays and all that jazz

Well it's been a good holiday season.  No complaints here, really.  I got a crock pot!  Oh, how times have changed.. the difference between what a child wants as presents and getting a crock pot.  But now I can make stew.  And who doesn't like a nice stew?

It's been kind of a lonesome holiday, though.  Some relatives came to visit for a few days, and that's cool.  But the holidays primarily serve to remind that I've been alone for another year.  And that sucks.

Today, I'm particularly upset because a movie I've been looking forward to seeing just came out today (Pan's Labyrinth) but hasn't been released anywhere near me.  People 'round here don't cotton to them furren films.  I guess I'll have to wait another six or seven months before I'll be able to get it on dvd.

Random observation for the new year:
They shouldn't call soy milk 'milk'.  It really doesn't belong in the milk aisle.  Unless it's pumped out of the tiny teats of a li'l soy bean's udder, it ain't milk!  Now, I'm not saying that it's bad or bad for you, but they should call it what it is... bean juice!
Posted by EvilDolly at 7:30 AM No comments:

Today I endured Winters deadly rooftop winds for the annual Hanging of the Lights on the Carport Eaves!  The winds did blow, but I persevered.  Now I'm sitting down to some nice, hot cocoa with little birdies and pine cones on the cup.   Take that, christmas!

Got my xmas tree up, too.   This year I went with a black tree, pink ornaments, and purple lights.  Goes nicely with the blue icicle lights outside.   And since I already have all my xmas shopping done, why, I'm ready to go! 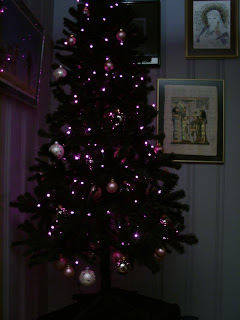 Also, say hello to Penelope.  She doesn't speak much. 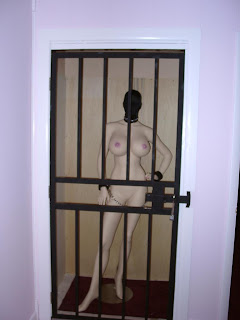 Posted by EvilDolly at 12:00 AM No comments: