It's good to have a Internet connection.  The other day, out of the blue, my connection speed dropped from about 2500 kbps to around 9 kbps.   That's slow.  That's really quite slow.  I tried to fix it myself with some modem shaking and router rearranging, but it was beyond me.  After an hour and half phone call to customer service (first to India, then to Missouri) during which I was told things like 'That shouldn't be happening,' they scheduled someone to come check my lines the next day.  Later that day, the discovered some outtage somewhere, and everything went back to normal.  Coulda saved myself a long phone call, if I'd just gone to bed.  Let that be a lesson to you.  About what, I'm not exactly sure.

In other news, I finally got that old 59 Jaguar sold.  It's been sitting there, unmoving, for about 5 years now.  Thanks to someone who knew someone who spends lots of money collecting old cars, it's now gone.  Had to push it out of the driveway and onto a flatbed thingie, breaking the flatbed thingie and leaving a nifty gouge in the street, but it's gone.  Looks kinda weird to have an empty driveway again.  It was a cool old car, but I don't have enough of a collector's zeal to go to the effort and money of fixing it up right.

Yesterday, I saw another micro-turtle, trundling down the sidewalk beside my house.  A little guy, barely filling the palm of my hand.  Here he is, placed artfully atop a leaf for your viewing pleasure: 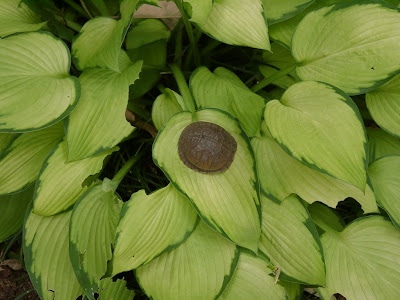 Posted by EvilDolly at 5:30 AM No comments: