I keep being lazy and putting off updating the journal thingie.  But then again, nothing much of note has happened.  But does it ever?

Here are some photos I took of my new dollfie.  She's just supercute.  And so well behaved!  She has hair, but I didn't bother putting it on.  She's pretty enough without it. 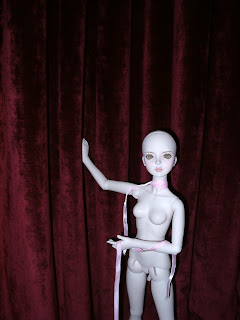 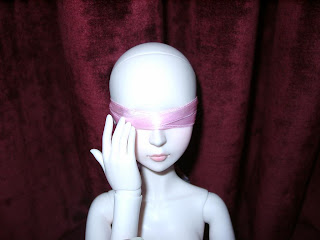 It's been so hot here, but the past few days have been cooler.  You know it's been hot when mid-90's counts as 'cooler'.  Been watering the lawn like crazy, and after 4 years, some of the grass is actually spreading.  There's a chipmunk and a turtle living in my front yard.

I've not been finding much worth renting lately.  I've bitched about crappy horror movies before, and I'll do it again.  I keep renting this and that in hopes that I might find a gem in the rough.. it happens, if rarely.  But mostly it's just crap, crap, crap.  Low budget, bad script, stupid plot, terrible acting, the list goes on.  And low budget doesn't necessarily mean bad.

But high budget doesn't mean something's going to be good either.  In fact, the higher the budget, the more chance there is that's it been homogenized to dull pablum with a few special effects thrown in.  Most of the high budget thrillers and horrors have no personality and the same, re-used plots.  You know, the kind you're watching and think, 'Oh there's no way the plot twist could be that bland and predictable.  There's no way.  Oh my god, it is.'  A sad state of affairs.

Evil Dolly's Movie Recommendation of the Day:  Silent Hill.  Well, this one was a pleasant surprise.  It turned out a whole lot better than I expected, especially for a movie based off a video game.  It was a nice, tidy little movie with character.  The sets were great (I love decaying buildings like that) and moody, the monsters were cool, and they went more towards 'disturbing' than 'disgusting'.  Disturbing works better for me on many levels.  You know, creepy.  It didn't get annoying with false scares, either--like cats jumping out and junk like that.  On the downside, the use of scary little girls seems routine nowadays,  but I guess if they had deviated it wouldn't have been true to the game plot.  Also, they could have done so much more in exploring the torturous disturbingness of the settings.

However, I absolutely loved the nurses... those coulda come straight from my own head.  Wee!
Posted by EvilDolly at 12:30 AM No comments: