So out of the blue I today I recalled a silly thing from my youth.  I guess this was back when I was six or seven?  Early '80s, anyway.  At that age I had to accompany my mom on endless, boring shopping trips... this store, that store, this mall, that mall.  Mostly clothes.  I hated it, yet I spent so much time in '80s malls and department stores that I'm oddly nostalgic for it all now.  Sometimes you'd get lucky and there would be a play area, but lots didn't.  I recall entertaining myself by hiding under clothing racks and exploring architectural curiosities like carpeted walls.  That wasn't uncommon at the time.  Anyhow, there was this one clothing store - I wanna say it was called Pinky Punky - that had one of those sofas that are in the shape of a giant set of red lips.  This style, if you don't know what I'm talking about: 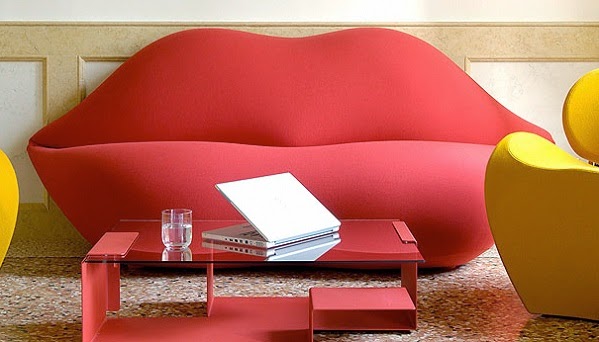 I was fascinated by that sofa.  I distinctly remember discovering that I, being quite small and skinny, could wedge myself pretty far between the top and bottom plush lip cushions.  At first it was just horsing around, but on later visits I developed the fantasy that I was being sucked into these giant red lips, and when they finally let me go, I'd be a girl.  I had lots of transformation and bondage fantasies starting around that age that made me feel funny.

What's been going on?  Well, not a lot, really.  It's been a very mild summer, and unusually wet.  No complaints there.  I've been getting back into some writing after being in a creative rut for a long time, so that's good!  I hope I have something to show sometime soon.
Posted by EvilDolly at 8:39 PM 5 comments: