Wow.  Well, last night I wished for a strong, summer storm and today I got one.  Lightning and thunder all over the place.  Hmm.  In that case, tonight I'll wish for a good slave.  We'll see what tomorrow will bring.

Here's a few photos of my newly remodeled play space.  Hard to call it a dungeon when it's on the second floor.  It still needs a few touches here and there, but it's pretty much done.  One side is burgundy austerity and the other side is pink fluffyness.  The archway in the middle has dozens of moveable tie-offs.  There's plenty of ceiling ring bolts, too.  There's a remote controlled hoist under a hatch in the ceiling.  There's a cozy little wall cage, nice and sturdy.  Something for everyone. 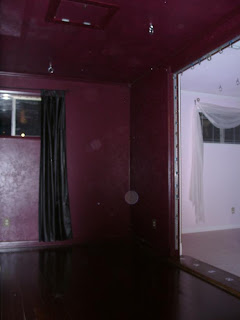 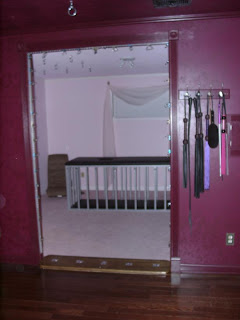 Posted by EvilDolly at 2:30 AM No comments:

Holy Bejeebus it's hot out there.  It's been getting to 104 for about a week now.  I've had to sprinkle like crazy to keep my sparse grass from drying up.  It hasn't rained in a long time, so the humidity isn't as bad as it could be, but it's still a wall of heat when you step outside.  Sure wish I had a few nice, strong summer storms come through.  I've caught that box turtle sitting under the sprinkler a couple of times.  I guess turtles have it rough in the heat... they can't sweat or pant or anything.

I haven't updated in a bit.  All of my writing energy has been going into a new story.  I started it about seven months ago, but got writer's block and stopped for a long while.  I guess I got inspired again and I've been back at it.  Spent an entire day last week doing nothing but staring at the pages and typing away.  I know it's hardly classic literature, but I guess you have to write about what amuses you.  Otherwise, what's the point?  No clue when this one will be finished, as it's turning into quite a long one.  I do tend to ramble and let things drag a bit, I know, but some details are just important to me.  Besides, it's not like it's publishable material anyway.

My dollfie arrived from Korea!  She's so cute.  I love her!  Haven't decided on a name yet.  I'll have to wait til one comes to me.  I want to take some pictures of her, but I don't have any clothes for her yet.  Naked dolly.  Tsk tsk.

I've been sitting here watching this nifty little plant I got.  It's called a Dinosaur Plant.  It comes as a withered, dusty clump of dead plant, but when you put it in water, it unfurls, swells up, and turns green.  When you want, you can let it dry out and it'll curl up back into a dry clump and stay alive that way for 50 years.  Talk about an easy plant to take care of.  Finally,  a houseplant I can't kill... even if I don't ever water it again, it'll still outlive me.

Had a stress dream last night.  Some of my stress dreams are about being back in school (you know, realizing you have a final due for a class you didn't even know you were attending, that sorta thing), but often as not they're about animals.  I've had a lot of small pets in the past, from freshwater and saltwater aquariums to snakes, lizards, and bugs.  In these stress dreams, I find that I have a number of pets that have been neglected.. sometimes they're animals I've never had or ones that don't even exist.  Like maybe there'll be a stack of half a dozen small cages and I realize I haven't fed them in months, and some are dead.  Or maybe a half-empty or filthy aquarium I haven't touched in ages, and realize there's still live fish in there I need to take of.   In last night's dream, I had a large and well-tended aquarium, and the fish were alive and swimming, but they were covered with mold.  Weird stuff.

and down below me you are waiting, smiling like a ghost
come open up your filthy heart to me
Posted by EvilDolly at 9:30 PM No comments: