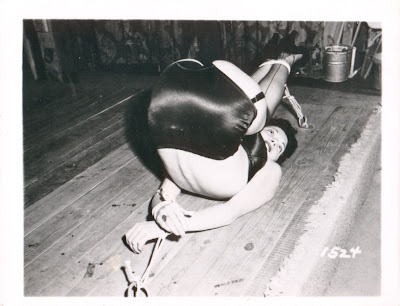 By vintage, I'm referring to the photographs taken by intrepid fetish pioneers in the 40s and 50s.  This sort of thing existed before then, of course, but it's the images of that era that have really seemed to stick around.  Moreover, they inspired many photographers, models, and artists to realize their own fetishy dreams and create the content you could find in the old bondage magazines and media of the latter half of the 20th century.  Not to mention the number of naturally born kinky persons whose first introduction to bondage and fetishism came from stumbling across magazines and stills from that era. 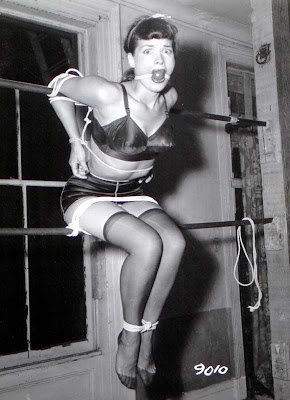 While there were plenty of photographers and producers doing this kind of work, the majority of the photos you're likely to find were distributed by Irving Klaw.  Unfortunately, he was targeted by a government witch-hunt that was trying to prove this "pornography" (though there was no sex or even any nudity) was responsible for juvenile deliquency in America.  Fearing prosecution, Klaw did as many of us would under similar circumstances and caved to pressure, burning possibly 80 percent of his original negatives.  But they weren't exactly successful in stamping it out, were they?  And while he may have only been in it for the money, his efforts did a service for inspiring those who would come after.  For instance, the work Betty Page did with Klaw would later contribute to her becoming a pin-up cult icon decades later.  Isn't it funny how one era's "porn" becomes another era's art? 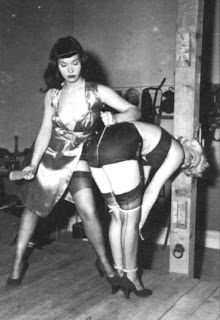 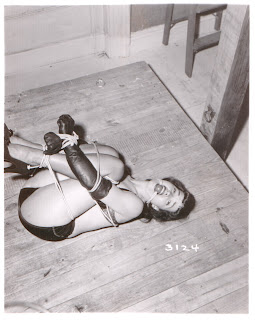 Perhaps you don't enjoy these sorts of pictures, or the style, and that's fine.  But I do.  They can entrance me better than most modern bondage art.  Which is not to say I don't love the modern stuff, but the images from the 50s hold a special fascination for me.  But why?

Maybe part of it is the black and white images, which seem simultaneously both starkly gritty and far removed.  I'm not sure if its the film used, the cameras, or simply the patina of age which gives the old photos quite a different look than many modern black and white photos.  Sometimes the sets are a factor in their appeal: the old furniture, the lamps, the rough homemade bondage devices.  The air of playfulness is also endearing.  It's more like bondage for bondage sake;  titillating and teasing, yes, you can imagine what you like, but it doesn't intentionally lead one to believe that it must always inevitably lead to the ripping off of clothes and sex.  Perpetual, the captivity exists for a purpose all its own, in a world of its own.

I think a large part of the appeal for me is the fashion.  I enjoy (to a fetishistic degree) many of the clothes from 40s and 50s, especially the undergarments.  The shiny briefs, the girdles, the conical bras, the stockings, gloves and so on.  All the satin and rayon and nylon with hardly a scrap of cotton in sight.  And I really do prefer the look of clothed bondage instead of nudity.  With clothing there is mystery, things left to the imagination, and also, perhaps, an additional air of chastity, a barrier, an inaccessability affecting both you and her.  At the very least, clothed bondage seems less overtly sexual and more damsel-in-distress.

Well, whatever the combination of many factors, these old photos have a special hold on my imagination.  Just for fun, here are a few more, though there are many others floating around out there. 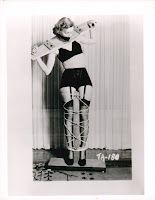 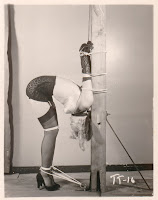 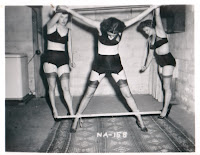 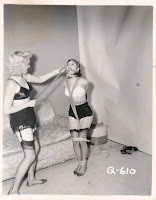 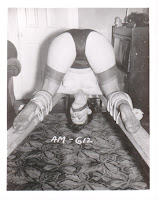 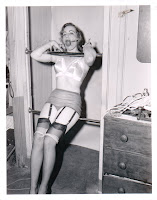 Posted by EvilDolly at 8:09 AM

Those were certainly some hard-working models--and patient photographers!