Namio - A Face Is For Sitting

The weather is turning!  The nights are getting colder.  There are piles of pumpkins for sale at the grocery store.  A few posts ago I related a dream that put me in mind of an artist I might review.  So now I think it's time for... 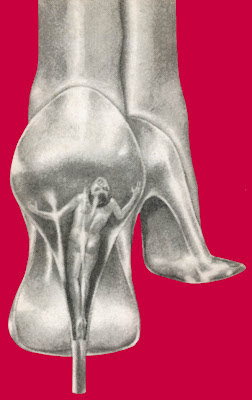 The work was almost entirely pencil sketches using soft shading on textured paper.  Done in a pencil gray, the only other colors were very minimal skin tones and a dark red, most often used to put a woman's dress pattern, heels, or lipstick in bright contrast.  Namio's very favorite subject, it would seem, was serious facesitting, with a smaller, wimpish men's faces and heads being absolutely enveloped by the plush posteriors of much larger and full-figured women.  Stanton did the same thing, having weak tiny men being physically overpowered, dominated and smothered by stronger, taller voluptuous women.  I don't know if Namio and Stanton influenced each other way back in the day.  I suppose it's possible.  Or perhaps small men being overpowered and turned into furniture for big women is simply part of a Jungian zeitgeist for many submissives.  A convergent evolution, if you will.

Other common Namio subjects were graphic toilet slavery, watersports, and various forms of cruelty.  He sometimes diverged into fantasy such as doll-sized men in, ah, awkward situations, and some kind of mutant male race evolved to service women.  He was inventive with the use of harnesses and special outfits to hold a man's face firmly in a woman's rear while she strolled about town.  The women, apart from being plush, often smoked and bore serene expressions even when engaged in acts of sadism.

Speaking personally, I'm not generally a fan of F-m subject matter.  I can't empathize too greatly with the male sub situation.  I would have enjoyed seeing more female-on-female domination, but that was extremely rare in Namio's art, so you take what you can get.  However, despite being a domme myself, I do love facesitting/smothering even to the point of being the bottom, and so can easily imagine myself in some of the positions Namio's males find themselves in. 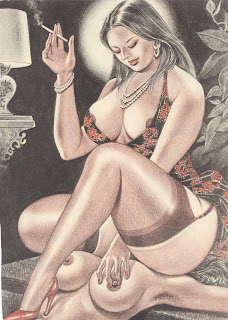 I'm not aware of any current publications featuring Namio's work, though there may be some.  I saw that there is one company, a VW Productions, which claims to have the rights to publish, though I don't know anything about them or if they're on the level.
Posted by EvilDolly at 5:03 AM 4 comments:

I got Guild Wars 2, so that's been a distraction.  It's pretty and seems fun so far.  Playing as a plant person.  I haven't played many MMO's, but I did play Star Wars Galaxies for a number of years.  Like, seven years or so.  Ended up as the leader of a guild and the mayor of a player-built city.  My favorite profession was the creature handler.  I had all manner of strange and rare pets.  Had a lot of good times in that game.  But then SWG closed shop as SW-TOR started up.  I played it for a couple months but found the limitations discouraging, and I quickly lost interest.  At least GW doesn't require a monthly subscription, so that's a plus right away.

On a completely random note, there's this.  I don't know where it's from, but it's fun to look at.